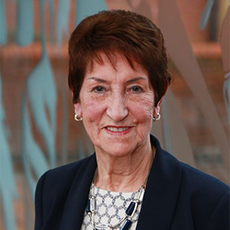 Norma Redfearn CBE was elected to her first term as Elected Mayor of North Tyneside in May 2013. She was re-elected for her second term in 2017. After the North of Tyne mayoral election, in 2019, Norma was appointed Deputy Mayor of the Combined Authority, as well as Cabinet member for Housing, Land and Development.

The Deputy Mayor was an important voice behind the creation of the NTCA. She is a fervent supporter of regional devolution.

Before her various roles in local government, Norma graduated from Newcastle University and had a 30-year teaching career. This spanned from primary and secondary education, 14 years as a head teacher and work in an education advisory role.

In 2004, Norma was elected as Councillor of the Riverside ward in North Shields, a role she held until her election as North Tyneside Mayor in 2013. From 2005-2009 she served as the Cabinet Member for Children, Young People and Learning.

In addition to her role as Mayor and Deputy Mayor of North Tyneside Council and NTCA, respectively, Norma has been appointed to several outside bodies, which include: